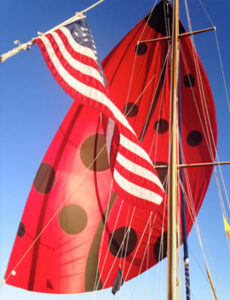 Your sails brought us safe and in comfort to Hawaii, we used the Light Air Main and Spinnaker combo for many hundreds of miles. All the sails you Ladies made were behaving great and setting well; I was impressed as was Bryan, who has a lot more experience. Loved the trysail too, sturdy, no flapping, and able to put away a beating without complaining. 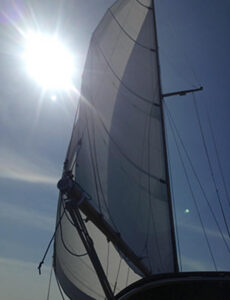 I managed to get the boat out this weekend. The sails were great. Together the new jib and main provided much more power then I had experienced in the past and I was able to point much closer into the wind.

It was nice not to have to go to the bow and change jibs as the wind picked up.

I think the roller furling Jib will keep me away from powerboats for a couple more years. 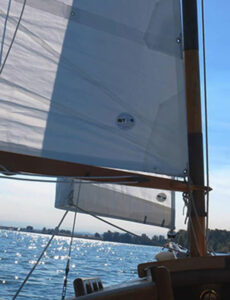 Seeing the photo of Mike White’s new sails reminds me that I owe you some news about the wonderful new main you built for PickPocket last year. Here are two photos taken last summer on one of the first outings with the new main on a light air day – conditions that speak to one of the strengths of the Eel. It was no surprise, but nevertheless gratifying, to discover that the new sail fits the vessel beautifully – a testament to the care and concern that you guys showed in the design and construction. But that wasn’t a surprise; the same thing happened when you built us a new jib a few years before. Maybe next year it’ll be a new mizzen. 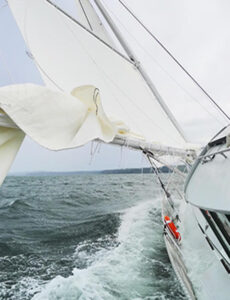 I finally got to try out the new drifter that you made for Panope. You may recall from my sea trials of 2012 that with the two working sails, she sailed with a bit too much weather helm. You suggested that a larger, light air sail would be great for light winds and would help balance the rig a bit better. As I raised the drifter for the first time yesterday (6 to 8 knots of wind), and while it was still luffing, A bow wave suddenly appeared and started frothing about. I looked back to my father (who was at the helm) to see what was going on. He shrugged in confusion and said it was like the engine got turned on. The boat just leaped forward.

We also experimented with flying the drifter and the working jib simultaneously. Working jib low and hanked to the fore stay. Drifter hanked to the “fall” of an Amsteel halyard and set all the way to the mast head (like a Yankee, I guess). Boat made 6 knots on a close reach in about 10 knots of wind. Helm remained light, there was very little weather helm and Panope stood upright with a nice dry side deck. It was Amazing. Even when the wind died to next to nothing, the boat kept moving at a couple knots with a completely responsive helm. Panope has never sailed like this.

Thank you so much creating such a perfect solution for Panope’s mediocre light air sailing performance.

“The other good news is your sails were fabulous. I don’t recall every having seen better and I have see a lot, really a lot. The genny broke perfectly and held its shape spot on through the conditions. We pushed the boat very hard and were rail down much of the time going to weather. I know…but the boat seemed to like it. The loose footed main was a peach. We bladed it out with lots of outhaul and vang and really made no attempt at all to depower it when it blew. Racing the boat hard, the sails were never an issue. I think you did a great job with those sails.” 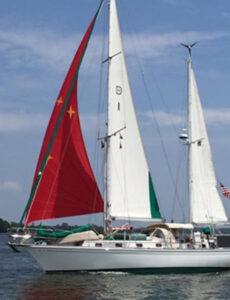 Southern Cross is the first of her design (Dickerson 36 Ketch) and is the last wooden boat built by Dickerson Boatbuilders in Trappe, MD.

Your sails are holding up very well and have given us use from Prince Edward Island Canada to Cuba, the Bahamas and points in between. The drifter is beautiful, we love showing it off. Also have earned 2 first in class trophies in the annual Dickerson Regattas. Didn’t know you were making racing sails, huh? Thanks so much. 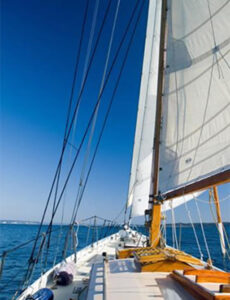 Just felt like sending a ‘thank you’ for building such great sails. Here’s a photo from a few days ago as SKYE sails along in Admiralty Inlet, with the one year old staysail, 4 year old main and 20+ (?) year old Yankee jib. (The latter is still looking good and going strong, with some new hanks sewn on.) 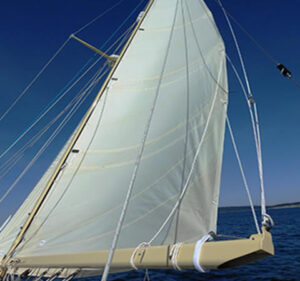 The sails are so beautiful, spectacular when lit up by full sun. I think of you all each time I’m trimmed out, appreciating all the care and expertise that went into their fabrication. Could not be any more secure than with those sails. Tested them in 25-35 knot winds with 6-8′ waves while crossing the Straits to Port Angeles last year-the boat and sails were a dream-what fun that was looking up at cresting breakers while dropping into the troughs.

Thanks to you and all of your crew for the beautiful sails, that turn many a head! 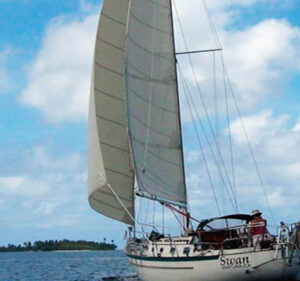 We thought you might like an update on the sails you made for us. After almost seven years and over 23,000 miles, they are still in great condition and taking us wherever we want to go. The mainsail has been set the longest and still retains its beautiful shape. During one passage it was set for 49 straight days during light and heavy weather, tropical sun and North Western rain and fog. The gorgeous red nylon drifter you made for us seems still as bright as when you made it. Though all are in need of a good cleaning, none has ever required repair. Given the abuse they’ve endured through light air and gale, this is truly a testament to the skill and materials used by you and the marvelous sailmakers at your loft.